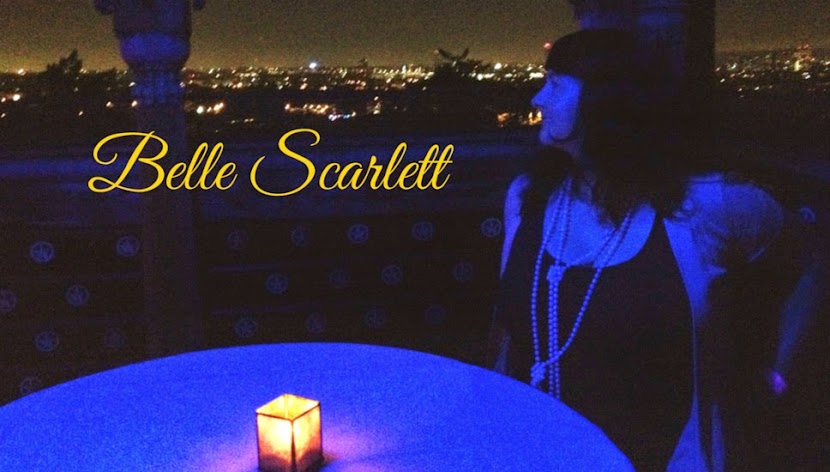 SHARE THIS LINK ON YOUR FACEBOOK PAGE AS OFTEN AS YOU LIKE UNTIL BELLE SCARLETT'S BIRTHDAY ON ST. PATRICK'S DAY, MARCH 17th for multiple chances to WIN these prizes for three (3) lucky winners:

ALSO... ALL NEW ON KU! By The Naughty Literati's Belle Scarlett

THE WOODSMAN  ON AMAZON & AUDIBLE

ONE NIGHT WITH THE ALPHA KING  ON AMAZON

Posted by Belle Scarlett at 12:24 AM No comments:

Welcome to the release day for...

Enjoy a taste of HOW TO BLACKMAIL A VAMPIRE 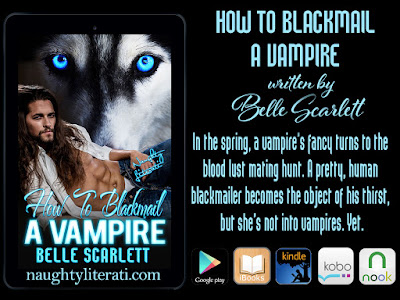 Caden Chase blinked. It was rare for anyone or anything to surprise him, but the slim woman in the yellow blouse and tailored slacks sitting in the chair on the other side of his office desk had managed to do just that. If nothing else, the past three months should have taught him to expect the unexpected where Serena Bliss was concerned.

“Do you mind repeating that?” Caden drawled his words, playing for time to assess the seriousness of this sudden crisis. He kept his tone low and controlled, striving for a cross between puzzlement and amusement, neither of which he felt at the moment.

His gaze ran over Serena’s form, searching the telltale pulse points at her throat and wrists with his heightened senses, trying to detect whether or not she was telling the truth or merely making a wild guess. As usual his attraction for this human female was distracting him. His jaw clenched. Damn, she looked good. Like a joyful drop of sunlight splashed on the coarse fabric of his dark world too full of midnight blacks and blood reds. But she was the last human he should be thinking of for a casual fling. And the more he got to know her, the more he wanted her for more than that.

Serena arched an eyebrow in blatant challenge. The action showed admirable bravado for one who believed she was at that moment in the presence of a bloodthirsty monster. One who could drain her in less time than it took for her next heartbeat to sound.

“I’m pretty sure you heard me, Mr. Chase. I understand that a vampire’s hearing is quite keen.”

It was true. Her throaty, melodic voice, for example, could arrest his attention from three floors away even in the middle of a busy workday.

“I think you’ve been reading too much Twilight, Ms. Bliss.” He didn’t like this new formality she was imposing like a barrier between them. Last week they had called one another by their first names, sometimes even with flirty smiles that made him look forward to each workday with her all the more. He was determined to find out the cause of her distinctly guarded shift in tone with him.

She tossed her caramel colored hair over her shoulders in clear impatience. Hellfire. She had sexy hair. Thick, shiny, and long enough to wrap around his knuckles while he held her still for his kiss…or his penetration. Or a love bite on her elegant neck. Hey, a vampire could dream, right?

She bit the corner of her soft lower lip in chagrin. Damnation. Don’t get him started on her pink, bow-shaped mouth that always looked as though it had just been thoroughly kissed. Ever since she’d started working for him, he couldn’t stop fantasizing that he was the lucky male who made her lips look so tender and lush.

Until she had called him out as a vampire just now he’d hoped finally to get the opportunity to taste those lips. At some point, anyway, after inviting her out to dinner on her last day of her independent contract with Chase Industries, Inc. Which was today, in fact. So much for that brilliant plan. She’d probably run screaming from the building if he suggested the two of them go out for a bite now. He would have to find another way to get close enough to sample that mouth.

“I don’t enjoy being toyed with, Mr. Chase.” She frowned at him severely.

He bit back a smile. Bambi trying to stare down Godzilla. Adorable.

He yanked his thoughts back to the more pressing matter at hand. What did she know, and when did she know it?

“Sorry. I can be a real pain in the neck sometimes, I know,” he quipped with a grin, deliberately showing far too many teeth. She shot him a wary glance. He felt her pulse throb in the air between them a bit harder in mild alarm. Good. She should be a little worried at this point. That showed at least a modicum of common sense. But he didn’t want to scare her away completely.

“I should warn you that if anything happens to me, I’ve taken steps that will automatically release the information I have about you to the proper authorities.”

“If you believe you’re threatening a vampire, I should certainly hope you took some common sense precautions,” he muttered. “But under the new Vampire Immersion Act, a citizen can’t go around accusing another of being a vampire without evidence of some kind. It would be like yelling ‘vampire!’ in a crowded blood blank. You could start a serious public panic. So tell me, why would you imagine I’m one?”

“Not just you. Your whole staff is chock full of vampires. As you well know.” She lifted her chin, daring him to contradict her.

“Oh, really? What tipped you off? Our black capes, red eyes, penchant for bats, and widow’s peaks?” He kept a scoffing tone but the utter certainty in her assertion gave him pause for real concern. He hoped she hadn’t voiced her accusations to anyone else. It would be a lot safer for Serena Bliss if she didn’t mention her suspicions to anyone but him.

In answer to his questions, she gestured to the glass wall partition that separated his office from the room beyond, where various Chase Industry, Inc. employees worked in cubicles.

“Gee. I wonder,” she mused in a mocking tone he didn’t like one bit. “For one thing, Henrick types about a thousand words per minute more than he claims on his resume.” Caden’s gaze followed the direction of her strawberry-polished fingernail and saw Henrick, one of his administrative assistants, typing on his computer with preternatural speed. His long fingers were a blur on the keyboard.

Serena didn’t wait for Caden to think of a rational explanation. Not that there was one.

“And by the way, have you ever noticed that Bryan always seems to have something other than java in his coffee mug?” She pointed at another pale man sitting at a cube desk. He took a sip from his mug that read, “Accountants Do It By The Numbers” and lowered it to reveal a thick, blood mustache on his upper lip.

“And then there is Vanessa.”

Caden wearily glanced over to where an impossibly beautiful brunette in a figure-hugging black tank top, pencil skirt, and stilettos was standing by the office water cooler. She applied deep red lipstick while looking into a compact mirror.

He gave a silent sigh of relief. “She’s looking into a mirror. Hardly something a vampire could do, right?”

Serena smiled sweetly in a way that was decidedly not. “Wait for it.”

They watched as Vanessa smacked her ruby lips together and then grinned into the compact to check her teeth. There was a smudge of red gloss on one of her incisors. Suddenly, the tooth elongated, pointy and sharp. She used her thumb to wipe off the excess lipstick from her fang.

Caden winced. His team had gotten sloppy with a nice, sweet human like Serena around the office for the past three months. They had grown to like and trust her enough so as to accept her into their midst. But they had clearly gotten too comfortable in her presence, letting their guard down to a dangerous degree. He’d have to have a serious talk with them about that.

He eyed Serena, reaching out with his extrasensory awareness to assess her feelings about what she had just shown him. She wasn’t as calm as she tried to appear according to her raised pulse rate, but she didn’t seem terrified. Yet. He stole what small comfort he could from that.

“And me? What makes you think I’m a vampire?” He sounded more nonchalant than he felt.

“You’re kidding, right?” She waved airily at the floor to ceiling window of his office.

Caden glanced out the window where dusk was falling on a panoramic view of the Los Angeles skyline. In the glow of his desk lamp he saw everything in his office reflected in the glass, including Serena’s lovely body in the chair across from him. Where his reflection ought to have been, however, there was only an empty chair.

“Kind of an undead giveaway right there. Wouldn’t you say so, Vlad?”


Savor an excerpt from my sexy shifter romance THE BERMUDA TRIANGLE  also inside Naughty Beasts! 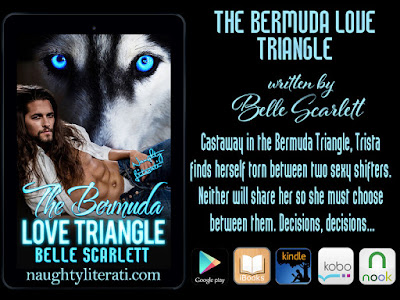 ENTER TO WIN a KindleFire loaded with Naughty Literati books! 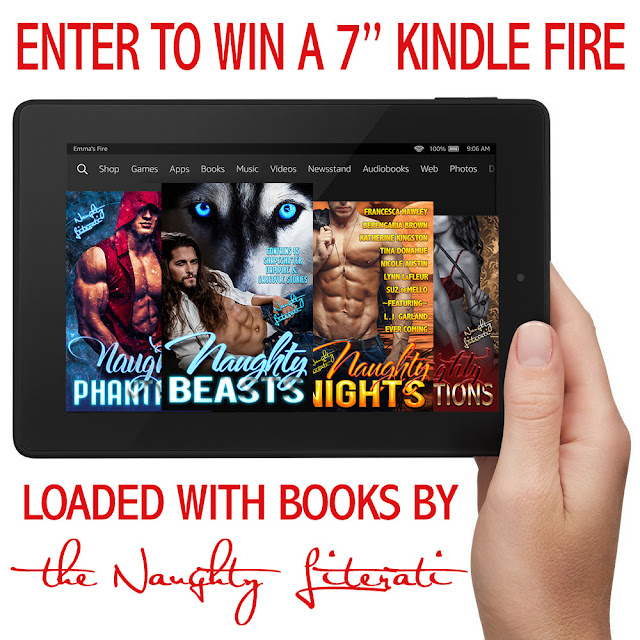 Posted by Belle Scarlett at 4:14 PM No comments: 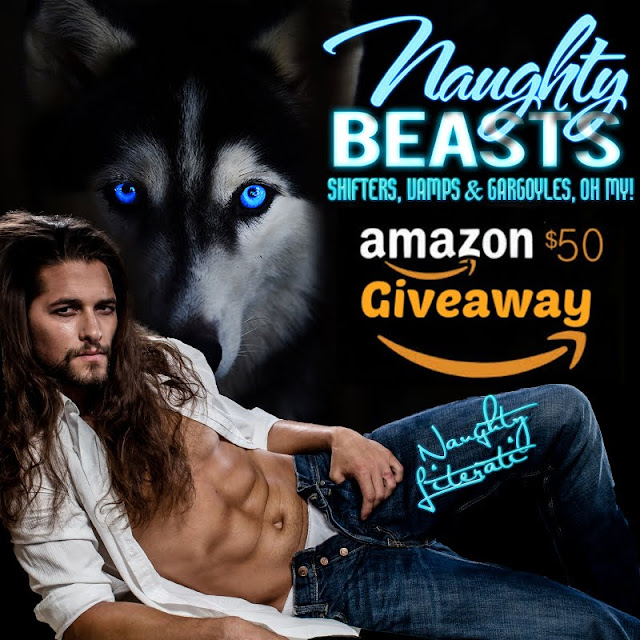 REVIEW TOUR SIGN UP NOW FOR A CHANCE AT A $50 AMAZON CARD!

AND we are still taking sign ups for the Phantasia Review Tour! 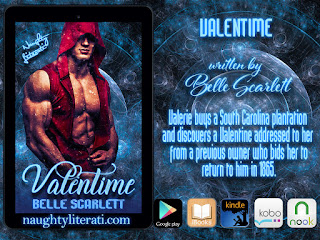 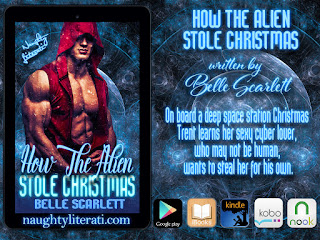 And TWO (2) chances to WIN a KindleFire LOADED with Naughty Literati books INCLUDING: 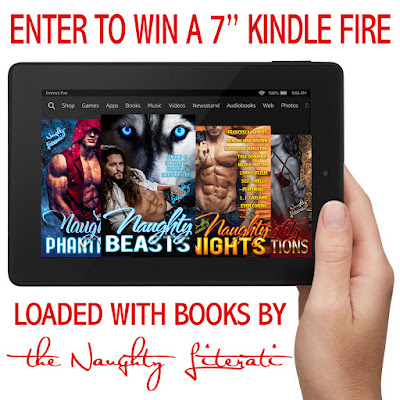 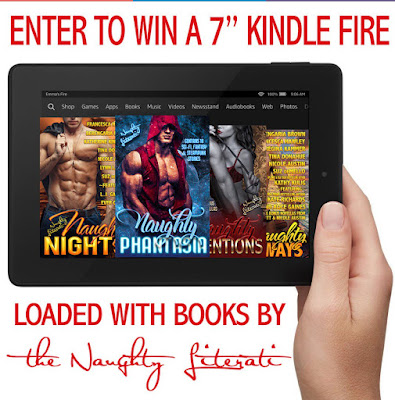 AND DON'T FORGET... NAUGHTY GETAWAYS is 40% off on KOBO until Nov. 20 with promo code at check out!
Naughty Getaways: Eleven Sultry Stories
Box Set promo on Kobo!
40% off with promo code 40BOX 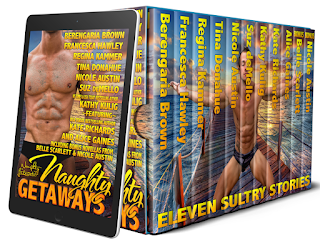 
Posted by Belle Scarlett at 11:33 AM No comments:

We have up to 25 FREE gift books (.mobi or ePub) of the following titles to give away, Reader's Choice!

ONE NIGHT WITH THE ALPHA KING
ABSOLUTELY ALPHA
THE WOODSMAN

Winners will be randomly selected from among those who make a relevant comment on this blog posting.

(Winners, you'll be asked to send your choice for your freebie and your email address to us in order to receive your prize, and your email will be used for no other purpose!) 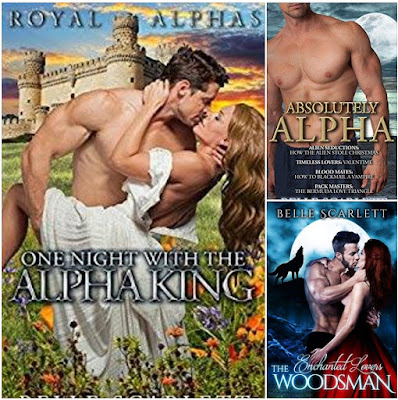 AND...
THE WOODSMAN by Belle Scarlett and narrated by Honey Scarlett & Leeroy Will: The Audiobook Lovers​ is finally out on #Audible!

With MUSIC and ATMOSPHERIC SOUND, get ready to for a 2 HOUR+ INTENSE PNR LISTENING EXPERIENCE with  all the naughty pixies, the sexy Big Bad Wolf-shifter, his hot lady in red, and all the sounds of Enchanted forest. Enjoy!
XO,
Belle Scarlett

Posted by Belle Scarlett at 10:30 AM No comments: